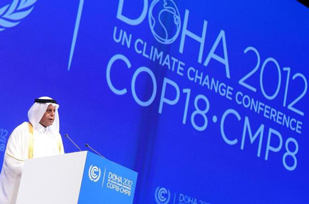 “This is not where we wanted to be at the end of the meeting, I assure you. It certainly isn’t where we need to be in order to prevent islands from going under and other unimaginable impacts.

“The biggest concern – and not just for small islands mind you – is the failure to deliver the mitigation ambition the scientific community says is essential to keep global warming from exceeding 2 degrees Celsius, to say nothing of 1.5 degrees, and the cascade of catastrophes that would follow.

“Parties have agreed to work together over the next two years to raise ambition. We know 2014 must be the year that the world finally joins together to close the ambition gap.

“It has become abundantly clear that unless the work is supported by world leaders, particularly those representing the countries most responsible for the crisis, we will continue to fall short year after year. We call on them to turn their full and immediate attention to this global emergency.

“We will know in the next two years, after which the opportunity to avert the worst impacts of the crisis may be irrevocably lost, whether they have delivered on this most basic function of leadership. It is the responsibility of people of conscience to hold them to account and history will be the judge of us all.”