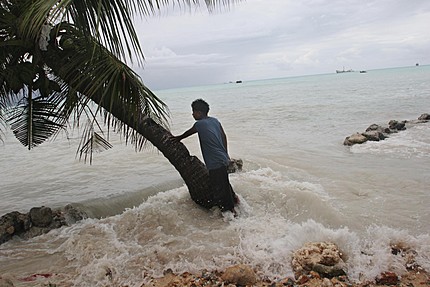 DOHA—Ahead of the climate change negotiations in Doha, the Alliance of Small Island States, Least Developed Countries and the African Group, which together represent 100 countries and 1.4 billion people who are highly vulnerable to the impacts of climate change, released the following statement urging developed countries to fulfill their responsibility to take the lead in addressing the crisis and outlined key expectations for the 2012 climate conference:

“The Kyoto Protocol is more than a treaty, it is the foundation upon which our multilateral effort to address climate change rests. As the only legally binding international agreement with quantifiable targets for reducing greenhouse gas emissions it is essential to building any future climate change regime, and our sole assurance that action will be taken.

“At a time when the impacts of climate change are growing more severe before our eyes, and with the survival of our nations increasingly in doubt, the countries most responsible for the crisis must agree to a second commitment period under the Kyoto Protocol that will deliver genuine benefits to the climate that sustains us all. Currently, what is on the table falls far short of this climate imperative.

“Our groups agree that this requires action in Doha that immediately works to reduce emissions in line with the latest scientific recommendations, including the following:

“Annex I Parties – including those that have not yet submitted Quantified Emission Limitation Reduction Objectives (QELROs) – must raise the ambition of their economy-wide emission reduction commitments and take legally binding, single number QELROS without conditions inscribed in amended Annex B of the Kyoto Protocol.

“The second commitment period should be for a length of five-years to avoid locking-in insufficient mitigation ambition.

“Parties must reaffirm that legally binding QELROS inscribed in Annex B for the second commitment period are required for all Annex I Parties wishing to participate in the Kyoto Protocol flexible mechanisms.

“Parties must affirm that the compliance system of the Kyoto Protocol applies to the second commitment period.

“All amendments to the Kyoto Protocol should be provisionally applied pending entry into force to ensure the rapid implementation of Annex I commitments.

“Furthermore, those few Annex 1 countries that are not parties to the Kyoto Protocol must also take more ambitious and comparable mitigation commitments under the LCA.

“This conference comes in the wake of disasters that offered an alarming glimpse at what life on a warming planet looks like. A failure to build on the progress we have made at this critical juncture could be a set back from which we may never recover. If hard decisions to dramatically cut emissions are not made now, developing countries will be forced to confront adaptation and damage on a previously unimaginable scale.”