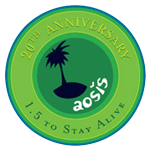 Madrid, Spain; December 08, 2019 – COP 25 risks undermining its headline claim of ambition.  A few very influential parties have stymied efforts in week one to respond to the climate emergency through procedural blockages, quibbles over text and threats of breaking consensus simply to preserve regressive positions. AOSIS is concerned that if this persists the majority’s efforts to create platforms to unleash climate action suitable for averting catastrophic warming will be thwarted.

Despite the rapidly narrowing window of opportunity to take decisive action and an array of outstanding priorities, the unwillingness of some parties, who are also undeniably culpable for the current climate crisis, threatens the very foundation of the Convention and the Paris Agreement. It is bewildering that as the first week of negotiations floundered because of an aversion to science, US$25.6 billion was raised to support continued fossil fuel extraction.

Over 500, 000 people gathered in the streets of Madrid this week to demand decisive leadership and they should not be ignored. This level of societal pressure is critical to unshackle ambition from those who stifle the voices that matter, even as they retreat from the multilateral process.

We take this opportunity to remind the world that the 2020s MUST be “Our Decade of Ambition.” Achieving a decade of ambition requires comprehensive climate actions. COP25 can and must trigger this critical decade of action. Parties must raise their ambition to match the demands of the people and science.  Governments and the financial sector must pivot towards a world that is progressively climate proofed. COP 25 must drive urgent action and support for particularly vulnerable states that have contributed the least to the climate crisis.

AOSIS has been the world’s most consistent voice for decisive climate action. We remain deeply committed to meaningful engagement but will not countenance inaction on the scale of an existential gamble.

Four Big Climate Ideas for “Our Decade of Ambition.”

Let’s make the 2020s “Our Decade of Ambition Campaign” Card

The Alliance of Small Island States (AOSIS) is the most consistent champion for climate action. Formed in 1990 and currently chaired by Belize, AOSIS is a group of 39 low lying small island and coastal developing states facing insurmountable challenges to our sustainable development due to the escalating impacts of climate change.