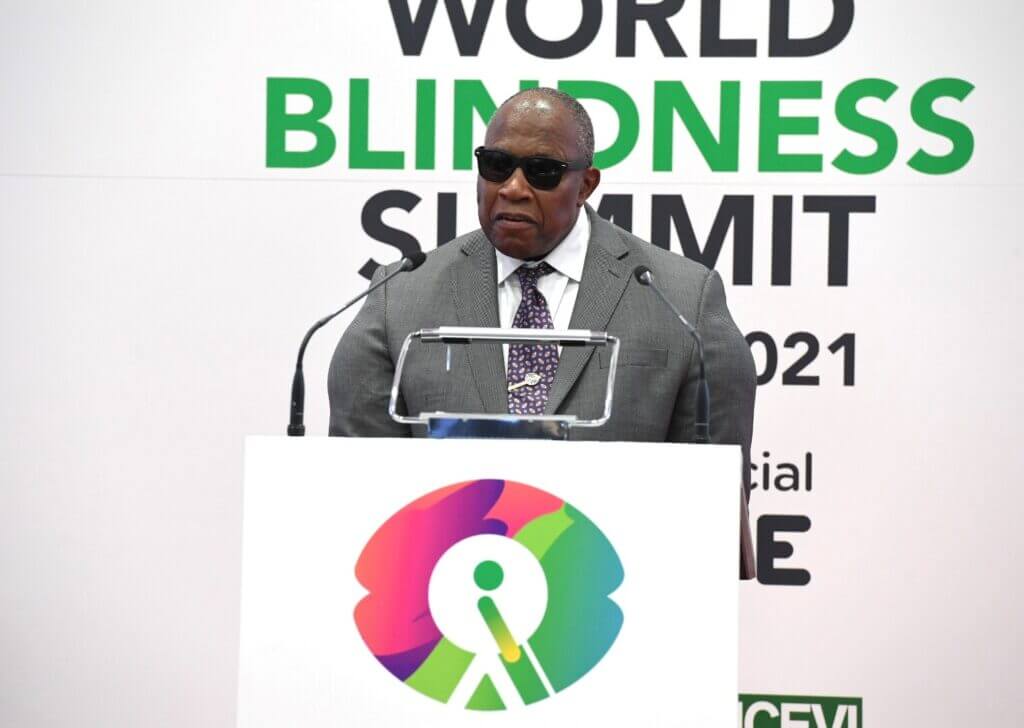 
Ambassador Aubrey Webson, Chair of the Alliance of Small Island States (AOSIS), has been awarded the Louis Braille medal for outstanding service at the World Blind Union (WBU) General Assembly.

Ambassador Webson is the second person from a developing country to ever receive this award, which recognizes individuals who have made a substantial and outstanding contribution to blind or partially sighted persons through their service. The award’s namesake, Louis Braille (1809 – 1852), was a French educator who developed the system of printing and writing, called Braille, that is extensively used by the sight-impaired.

Received last week in Madrid, Spain, the award was bestowed by Fernando Riaño, First Vice President of the World Blind Union, for Ambassador Webson’s life work. The Ambassador’s accomplishments include UN recognition of International World Braille Day and International Sign Language Day, and founding of the UN Friends of Vision, which has tabled a Resolution on Eye Health.

Ambassador Webson has also led the UN Steering Committee on Disabilities since it was founded in 2019, and all of this culminates his long history of working on the ground in the Caribbean, Africa and Asia, establishing schools and programmes that serve children with sight and hearing disabilities.

Ambassador Webson recognizes the importance of his family’s support growing up in English Harbour, a village on the south side of the Caribbean island of Antigua. “My family gave me opportunities just like any other child, to be fully included in every activity, and that made a difference. That is the difference that you can make in the life of a child living with disabilities.”

Ambassador Webson, in his acceptance speech, said that “Because the work I do is part of the journey I undertake in my life, it’s not work, it’s what I do.” His exemplary international career is a testament to changing perceptions of what it means to be blind, not only for himself, but for all visually impaired people.

Globally, 1.1 billion people experience vision loss, primarily because they do not have access to adequate eye care services. Most sight impaired people live in low- and middle-income countries, where support and services are less accessible. There is still much work to be done. Sustainable Development Goal #3 aims to ensure healthy lives and promote well-being for all, at all ages. Towards this goal, the World Blind Union represents over 250 million people from 190 countries that are blind or only have partial sight.

The Louis Braille medal awarded to Ambassador Webson is the highest award bestowed by the international community exclusively to individuals that serve persons with disabilities.